What is the Problem?

While today's cameras have been getting less expensive, and quality has gone up, the real cost in video production is actually the post-production tasks (or workflow). One can spend anywhere from a few hundred dollars to ten's of thousands of dollars on high-end cameras, but each time you do a video project, you must consider the re-occurring post-production costs. At the end of the session, someone must organize & synchronize all the clips recorded from each camera, transfer them to another system for review and editing, then finally distribute for others to view will far exceed the initial cost of the hardware quite rapidly.

So how do you reduce the costs and time involved to create a multi-camera recorded project? That's why we invented V-Station HD. It changes the paradigm of your "workflow" from shoot to delivery to make it less expensive and quicker to get your video projects completed... and with fewer people involved, and far less costs than traditional video production methods..

V-Station HD is a fully integrated "Multi-channel" Video Recording/Streaming System, It is used for multi-camera video recording and multi-channel streaming projects for audio-visual communications presentations, training, observation, and even live event production applications. It provides a revolutionary way by which video can be captured from multiple angles (operator or ISO) from up to 8 HD cameras or camcorders using our synchornous multi-channel video recording and streaming technology. As all the recordings are synchronized to a common clock, monitoring and playback can easily be viewed from all camera angles together. V-Station HD systems record full HD 1080p60 video from up to 8 HDMI or SDI cameras simultaneously as 8 individual tracks with 2 channels of audio per track. This 4 or 8 channel DVR capability also provides synchronized playback of up to 8 videos at a time (Studio Companion or PostTools required), allows logging (annotation) of events as they happen or upon review. If that were not enough, it has a built-in media asset management system (SQL database) to organiize all your clips into projects - with automatic assignment of categories you can choose for each shot and "take". It provides for backup and restore of the video content and its metadata to multiple choices of backup locations  local USB external drive, Local Network or file server, and over the internet to a FTP server. Then for delivery, the V-Station HD's AutoProducer feature provides the program reel (aka line-cut) that can either be live streamed or uploaded to your preferred video sharing site such as YouTube, Facebook, or to a private CDN or FTP server. If you're likely to take the recordings to a professional for editing, we've provided a seamless XML project transfer to Apple Final Cut Pro, Adobe Premiere Pro, and Vegas Pro non-linear editing systems, that can be used to make the job of the editor quick and easy using all camera footage shot on the V-Station HD Producer4, Studio4, and Studio8 systems.

In order to understand the motivation for inventing V-Station HD, its a good idea to see how the workflow from acquisition to delivery is traditionally done in a multi-camera shoot before there was a V-Station HD, and how V-Station HD changes the paradigm by automating some of the manual tasks that are done today, as well as managing all the footage shot at the time of the event, when under the control of a single system.

Traditionally, in "file-based" workflow, footage is acquired on removable storage media and is usually not embedded on each separate video recording the project, reel, or scene associated with the shoot. It is simply "Unstructured" and rarely is it synchronized. Once recorded, the clips must be organized and copied to some form of media asset management system, or directly to the post-production system for synchronization and editing. 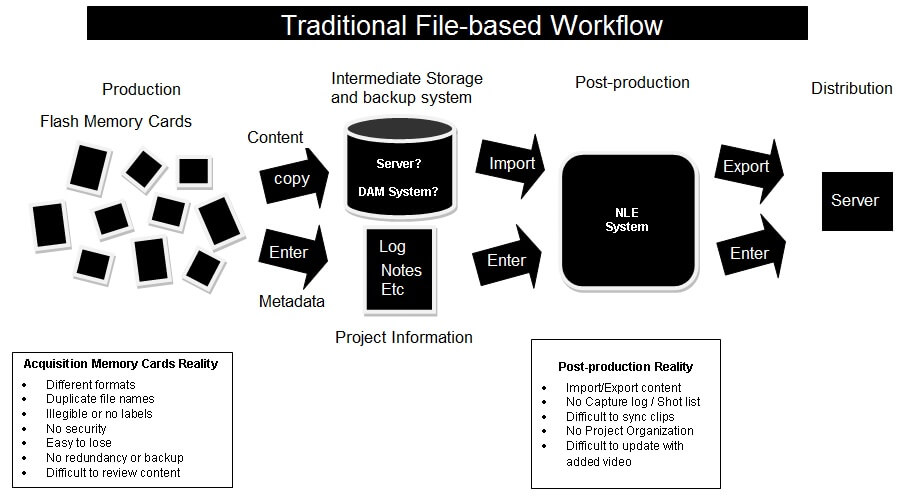 As any editor knows, it takes time to not only find (or sort out) and copy the footage, but to create the bins for the project, decipher which camera, which scene and shots were taken at the same time and determine the synchronization of all angles, and decide where the cuts are to be made. Also if there are re-takes, then it can get a bit confusing. If the camera's are from different manufactures, clip names can be quite different and this makes it even harder to sort out. If there is no time code, then synchronizing can be difficult if not impossible if there was no common audio or image at the start. In addition, removable media can be damaged or lost in the process. Once everything is sorted out, only then editing and review can be done.


In contrast, in a "project-based" video recording system, a uniform "structure" is imposed to ensure all file recordings from all cameras are organized and categorized from the start. The multi-camera workflow is greatly simplified, when the V-station HD software keeps all the recordings held in their respective projects. It maintains synchronization by using a common clock. This way, from the very start, project management, clip management, and synchronization is done automatically. As clips are captured from up to 8 cameras, they are organized into the current project and synchronized, instead of the way traditional post-production workflow is done. Although, V-Station HD uses the terminology used in Cinema production - Reels, Scenes, Shots, and takes, these terms can be re-labled to conform to your application, with what we call "Application Profiles". As recording are made, clips are automatically named and then classified into divisions that you define. They can easily be found via our integrated clip browser and immediately identified by the classification system. This not only saves time, but prevents loss of valuable footage while in the process of moving from the production to post-production. As a result, fewer people are involved and less time is spent in post-production. The bottom line: wrap to delivery ... in minutes!

The applications for V-Station HD are diverse. It can do multi-camera event recording and live streaming, or be used in pro audio-visual communications applications for observation and training. In the event video production world, applications include theatrical/musical performances, interviews, religious services, community television, web content creation, screen tests for casting television and cinema, pre-visualization of a cinema productions, V-Station HD makes an excellent real-time asset management system to backup your camcorder footage during the shoot in case the storage card is lost, fails, or even runs out of storage space. Applications for pro audio-visual include multiple cameras for multi-room training, scientific observation and analysis of events -- such as clinical behavioral studies, focus group studies, sports training, military training and mission simulation, aerospace, medical training for surgical and patient monitoring and review, safety and security studies, manufacturing process control monitoring are other applications.